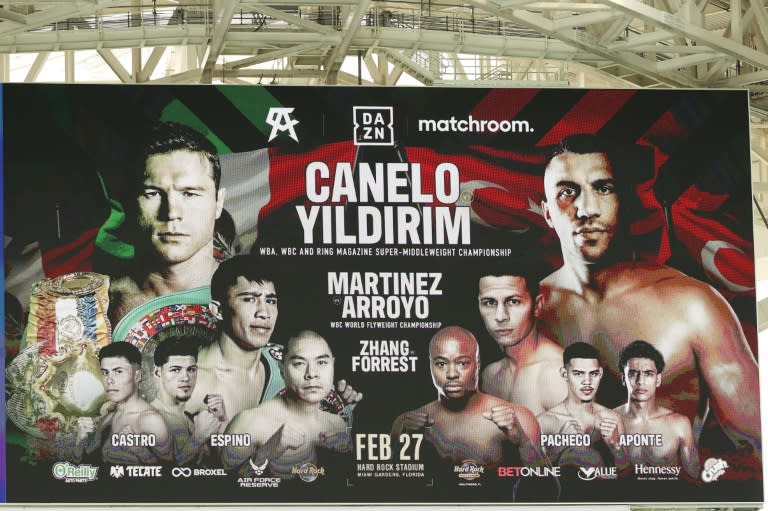 Saul “Canelo” Alvarez is an overwhelming favorite as he fights for the first time this year Saturday against Turkey’s Avni Yildirim with Alvarez’s WBC and WBA super middleweight titles on the line.

The Mexican star, who boasts a record of 54-1-2 with 36 knockouts, will be making his second appearance as a free agent since severing ties with Oscar de la Hoya’s Golden Boy promotions in November.

Although a unification bout with WBO champ Billy Joe Saunders is on his radar, Alvarez must first tackle Yildirim, who is the WBC’s mandatory challenger even though he hasn’t fought in two years.

In February 2019 Yildirim lost on a controversial technical decision to Anthony Dirrell in a fight for the vacant WBC title.

That ended a streak of five straight wins for the Turk, who owns a record of 21-2 with 12 knockouts.

Alvarez said he won’t be taking the challenger lightly when they enter the ring at Miami’s Hard Rock Stadium, home of the NFL’s Miami Dolphins with 15,000 spectators in attendance.

“I respect the challenger that’s in front of me right now,” Alvarez said “I know he’s a strong fighter. I know he has a lot of tools.”

If the fight goes Alvarez’s way, who has held titles in four weight classes, will be on the road toward accomplishing one of the few things he has never done — holding all four world titles in a division.

The path starts with Yildirim, with Saunders and IBF world champion Caleb Plant then on the horizon.

“We’re going to take these fights fight-by-fight, and hopefully I can fight four times this year,” Alvarez said. “Right now, this fight is the only one that exists for me, and I’m focused on what I have to do, my job for Saturday.”

This will be Alvarez’s second fight in Miami. He beat Raul Pinzon by first-round knockout at the Miccosukee Indian Gaming Resort in 2008.

Yildirim thinks he can spring an upset, despite a year in which “the pandemic affected everything.”

“We were patient and we were preparing,” he said. “We did camps in the United States and Germany. I never gave up.

“He’s a big champion, everyone knows that (but) I’m ready for the big chance. It’s my time.”

Boxing: Women must be allowed to fight for as long as men, says Shields

Canelo beats Yildirim in 3 Rounds. Did he give up or No ?