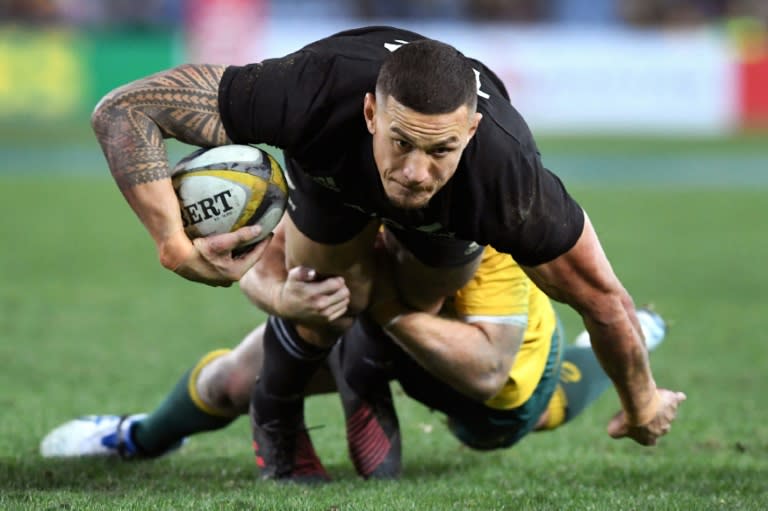 Dual-code superstar Sonny Bill Williams announced his retirement from rugby Thursday but the New Zealander isn’t giving up on sport, saying he now wants to concentrate on his boxing career.

“A massive thank you to the public and fans for all the support over years. To my many teammates, thanks for the lessons and help along the way,” he tweeted.

“It wasn’t a perfect journey, but the lessons have helped shape me into the man I’m proud to be off the field today.”

Williams won World Cups in 2011 and 2015 with the All Blacks, as well as numerous Bledisloe Cup titles against Australia and Rugby Championships.

He also won NRL premierships in 2004 and 2013, represented New Zealand in rugby sevens at the 2016 Olympics and won all seven of his professional heavyweight boxing bouts, including a New Zealand title belt.

In rugby union, Williams played in the centres and was renowned for his miracle one-handed offloads and fierce tackling, also earning a reputation as one of the most dedicated trainers in sport.

Off the field, the devout Muslim used his profile to speak up on causes such as refugee welfare and cultural tolerance.

Former All Blacks coach Steve Hansen last year rated Williams the best athlete he had ever worked with.

“The best athlete I’ve coached from a pure athlete sense, he’s a freak of nature,” he said at the time.

World Rugby hailed “an incredible career across multiple sports” after Williams’ announcement and the All Blacks also paid tribute to the 58-Test veteran.

“The offload king. Thank you for all you’ve given to New Zealand rugby and fans all around the world, @SonnyBWilliams. Enjoy retirement uso (brother),” the team tweeted.

Williams said retiring from team sports would allow him to prepare better for his boxing bouts, giving him up to six months to train, rather than six weeks.

“I spoke to the wife first and she had blank eyes but, like usual, she supported me.”

Williams last fought in 2015 against American journeyman Chauncy Welliver and the highlight of his pugilistic career was when he knocked out Clarence Tillman for the New Zealand heavyweight belt in 2012.

He is now based in Sydney and a fight against former Cronulla Sharks enforcer Paul Gallen would generate huge interest in Australia, although Gallen insisted Thursday he had “bigger fish to fry”.

Williams’ handlers were reportedly trying to set up a fight with Mike Tyson last year but the American refused, saying it would be “an insult to boxing” and he would only face “a real boxer”.

Aside from boxing, Roosters coach Trent Robinson said Williams would work with the NRL team in an off-field capacity, possibly with an eye on becoming a coach.

“He’s definitely got the tools to be a coach — he’s got presence, he’s got game understanding in-depth and intuition in the game,” he said.