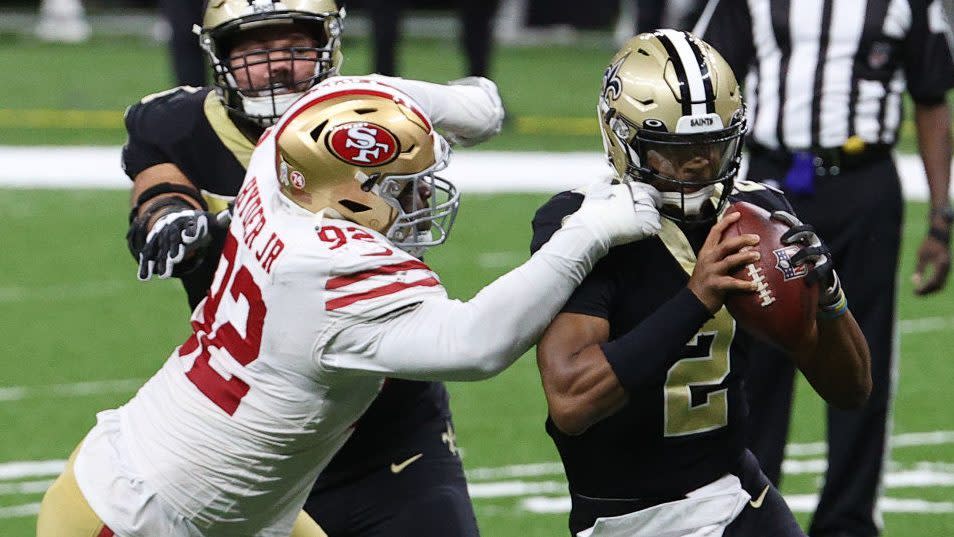 Defensive end Kerry Hyder is hoping to back up a career year with the San Francisco 49ers as he joins a new team in the Seattle Seahawks.

Hyder signed a three-year deal with Seattle that voids after two years after posting 8.5 sacks last year with the 49ers. Hyder had the chance to step up for San Francisco after Nick Bosa was lost to a torn ACL in just the second game of the year last season. Hyder said Thursday that the biggest difference for his production last year was getting the chance to play such a large role last year.

“It’s just the plays, being able to play and not just being a spot duty player, and the coaches trusting in you and allowing you to play I think that’s what helped it,” Hyder said. “I always felt like I could rush and felt like I could play well, I just felt like the right coach had to believe in me and allow me to play.”

Hyder has had two really strong seasons during his six seasons in the NFL. He had eight sacks with the Detroit Lions in 2016 and the 8.5 sacks last season for the 49ers. After his last breakout season, Hyder tore his Achilles the following preseason and missed all of the 2017 year in Detroit. He managed just one sack for the Lions in his return to action in 2018, and only had one the following year during his one season with the Dallas Cowboys.

Last season was Hyder’s first as a regular starter. Even in 2016 in Detroit, he only started two games and was primarily a rotational pass rush option. With the boost in playing time last year, Hyder rose to the occasion.

Hyder said he had been drawn to the Seahawks organization and believed he could fit well in their scheme. He compared his role to that of former Seahawk defensive end Michael Bennett and comes to Seattle from a defense under Robert Saleh that ran very similar schemes to what he’ll find under Pete Carroll in Seattle.

“I embrace the journey. It was a lot of ups and downs, but I prepare for every moment, especially this one,” Hyder said of joining the Seahawks. “I’m so excited to be a part of a group I can add to, I can add leadership, I can add play on the field. Feeling unwanted and someone bringing you in, that’s what I’ve been yearning for.”

Justin Fields embodies the NFL’s future, so why is his draft stock slipping?

By Gzero NewsWire
59 mins ago
NFL