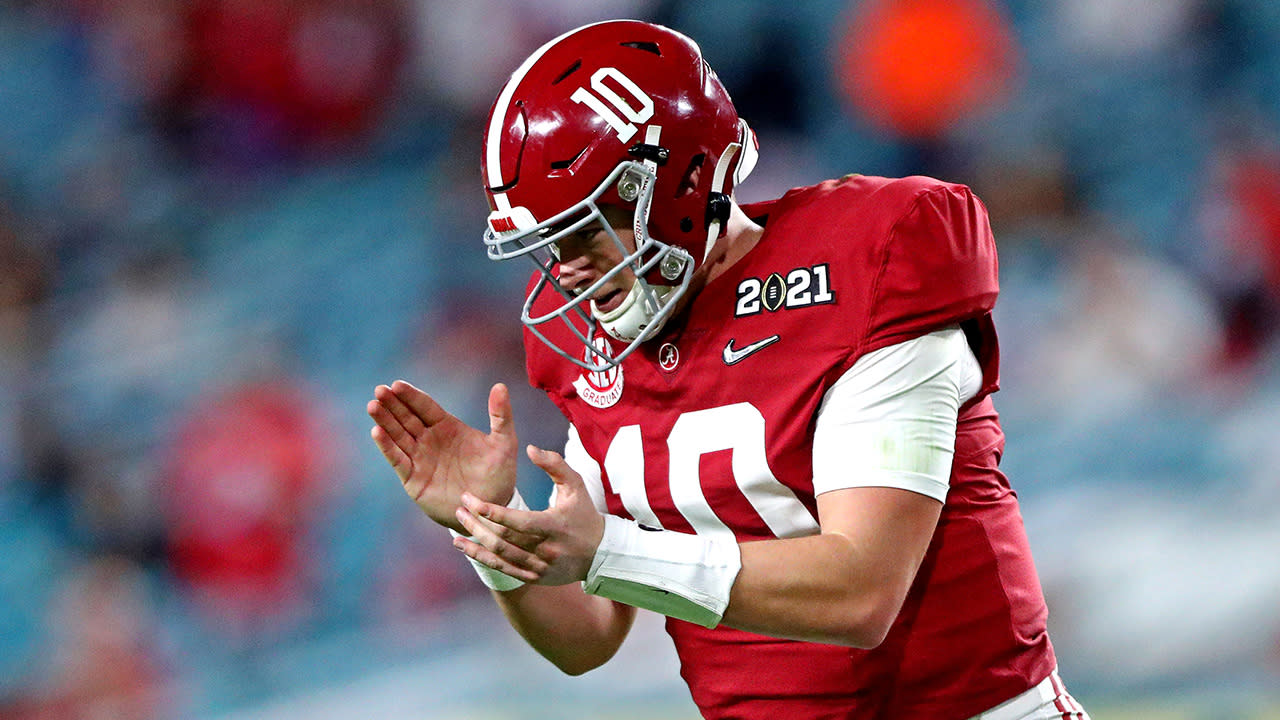 The debate continues to intensify as to which quarterback the 49ers will select with the third pick in the 2021 NFL Draft, and longtime Kyle Shanahan friend Chris Simms believes Mac Jones stands above Justin Fields when it comes to adaptability in a pro offensive scheme.

“Justin Fields, he translates to the NFL game, but you’re going to have to play a certain way with him,” Simms told NBC Sports’ Ahmed Fareed. “Mac Jones can play the position from any offense other than Lamar Jackson, and do everything you want and get in and out of huddles and checks plays, let alone going to make the right read and make one great throw after another, and that’s the value in what people are seeing with Mac Jones.”

Jones was extremely accurate in his lone full season as Alabama’s starting quarterback, leading the Crimson Tide to a national championship in 2020 while connecting on 77.4 percent of his passes. He certainly got some help from Heisman Trophy winner Devonta Smith at wide receiver, not to mention the two other offensive players from his college squad expected to be first-round picks in wideout Jaylen Waddle and offensive lineman Landon Dickerson.

He and the Crimson Tide defeated Fields and the Ohio State Buckeyes in that national championship game. Fields came out of high school as the nation’s top dual-threat QB, and lived up to that hype in his college career, never rushing for fewer than 250 yards in each of his three seasons, even with just one of those years being a full 12-game season as the starter.

We’ve seen Jimmy Garoppolo thrive when healthy in Shanahan’s 49ers offense, and considering he was an FCS product and second-round draft pick, it’s not hard to imagine that players with the talent of Fields and Jones won’t be able to find similar success.

More and more mock drafts have begun linking the 49ers to Jones following the major trade to move up from the No. 12 pick to No. 3. ESPN’s Adam Schefter said Tuesday that the 49ers are planning on selecting Jones, based on what he has been hearing.

But as many 49ers fans and pundits have pointed out, no one had any idea or inkling that the team was putting together a trade for the third pick until Schefter broke the news the morning of March 26.

This isn’t a front office that is prone to leaks, so the continued rise of smoke around Jones being the 49ers’ preferred option at No. 3 could be another prime example of smokescreen season.

Not a single person, even Shanahan or 49ers general manager John Lynch, truly knows which of these quarterbacks would fare the best in a offense engineered by Shanahan. It’s all speculation and projecting until the ball is kicked off on the 2021 NFL season.

But with 23 days until the first round gets underway from Cleveland, there will be no shortage of opinions and anonymous sources coming across your televisions and timelines.

Jaguars rank 22nd in the NFL in signing bonus usage