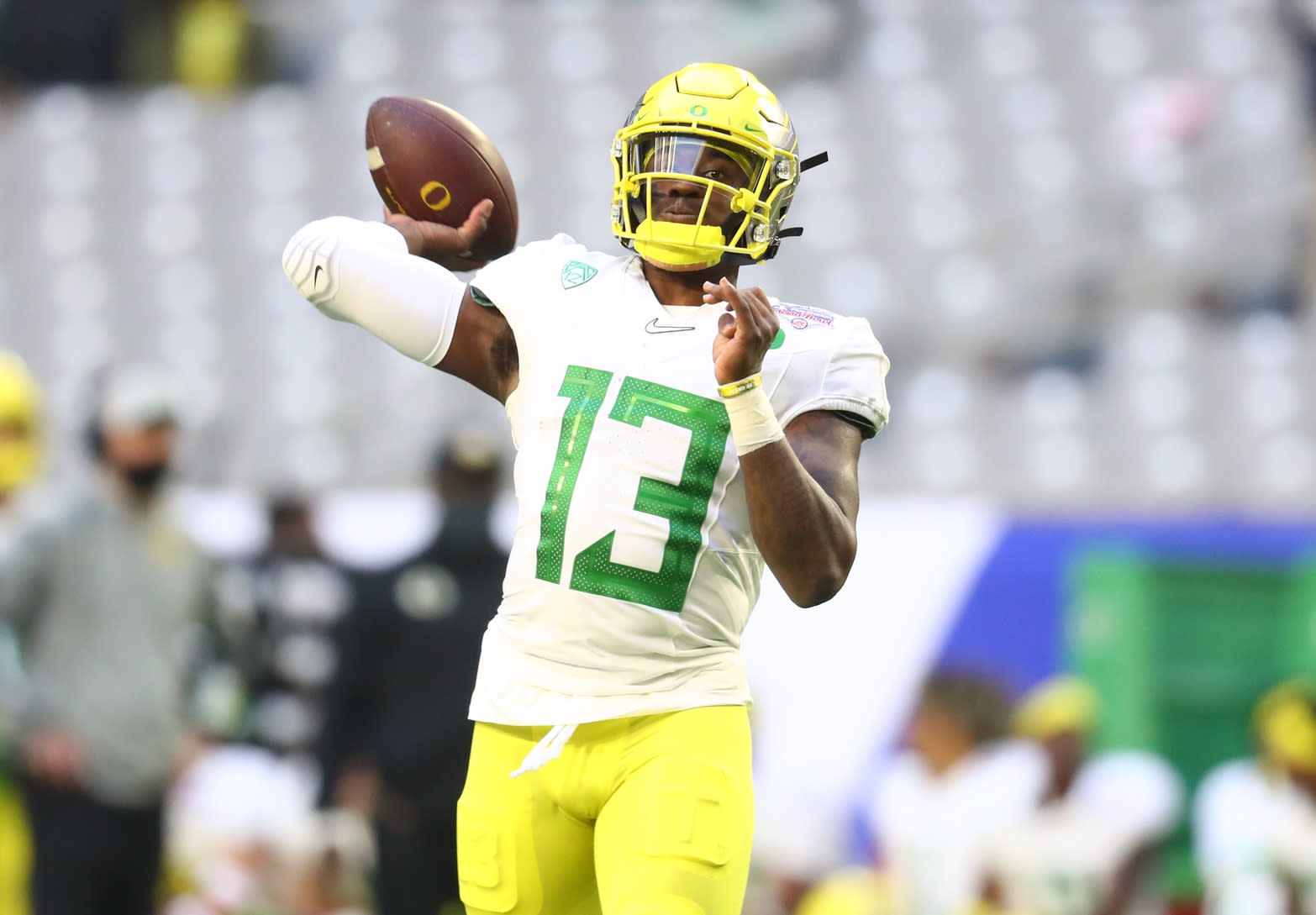 Another offseason. Another quarterback battle in Eugene.

After starting quarterback Tyler Shough transferred to Texas Tech this offseason, Oregon is guaranteed to have a new starter behind center. The question is who?

After the first spring practice Thursday, head coach Mario Cristobal gave the latest on the competition.

“We’re excited about that group,” Cristobal said. “There’s a lot of talent in that room and way before we entered spring, in fact right after the season, we always meet with our position groups and let them know what spring is going to look like, what the sets, the racks, the reps will look like, so that there is no confusion. There is no miscommunication. So heading into spring, they are very well aware of where they are, what they have to do to get better, and the opportunities they’re going to have to compete for this position.

If today’s an indication of what we’re going to be like it’s an exciting time for Oregon because these guys did a really good job today.

The odds-on favorite to win the starting job is senior Anthony Brown, who increased playing time in the team’s final two games, working in short-yardage packages in the Pac-12 Championship against USC and seemingly supplanting Shough during the Fiesta Bowl.

After the season, Brown announced he is returning for a final season in Eugene while Shough transferred out of the program, along with other scholarship quarterbacks like Cale Millen.

But, Brown is not guaranteed to start next season. A three-way quarterback competition is expected to commence between Brown, Jay Butterfield, and Ty Thompson. However, Brown clearly would not have returned to Eugene if he did not think the job was his to lose. The Boston College transfer did beat out Butterfield on the depth chart last season during the former four-star’s first season on campus.

“Well, Jay’s extremely not flying under the radar in practice,” Cristobal said. “Because he’s doing a great job. He’s talented, he’s a big guy, I forget that. When we were recruiting him, he was really thin, and the weight room has really paid off for him, and it’s impressive to watch him throw the football with such ease. He’s the guy that can throw it from the hash, the outside, the opposite numbers, which not many guys can do that. He’s very smart, he’s very accurate, hard worker, another guy that’s tough.”

It’s also possible freshman Robby Ashford could make a leap to compete for the job, but as of now it’s viewed as a three-man race. Currently, he’s seeing ample playing time on the baseball team right now but he intends to compete for the starting quarterback job this spring.

“Day 1, I think all those guys did well,” Cristobal said. “Robby did really well, Butterfield did really well… Ty, he looks the part. We knew he was a great talent coming in and in the little that we’ve seen, he hasn’t disappointed, as well as his competitive nature. Him and all those guys, they just attack the opportunities that we have, whether it be a workout, a film session, they attack it, and they’ve got the right DNA. We expect great things from Ty, no doubt.”

Another factor to consider is Oregon plays at Ohio State in the second week of next season. The Ducks may not want to have a freshman in his second start go up against one of the nation’s top programs in a road environment, so unless Butterfield/Thompson wins the job by far, Brown’s experience will likely be the tie-breaker.

The two-time defending Pac-12 champions will have high expectations heading into next season, especially given last season the Ducks were the youngest team in all of FBS football. Then in December and February, Mario Cristobal signed the best recruiting class in the Pac-12 and the sixth-ranked class nationally.

With a capable quarterback behind center, the Ducks will be the favorites in the Pac-12 with hopes of a college football playoff berth.

Jim Leonhard says he has ‘unfinished business’ at Wisconsin

By Gzero NewsWire
18 hours ago

Washington’s Charlie Ostrem on leading the Pac-12 in assists: ‘All credit goes to the guys scoring the goals’

CBS full seven-round mock draft: Who do the Jags add?