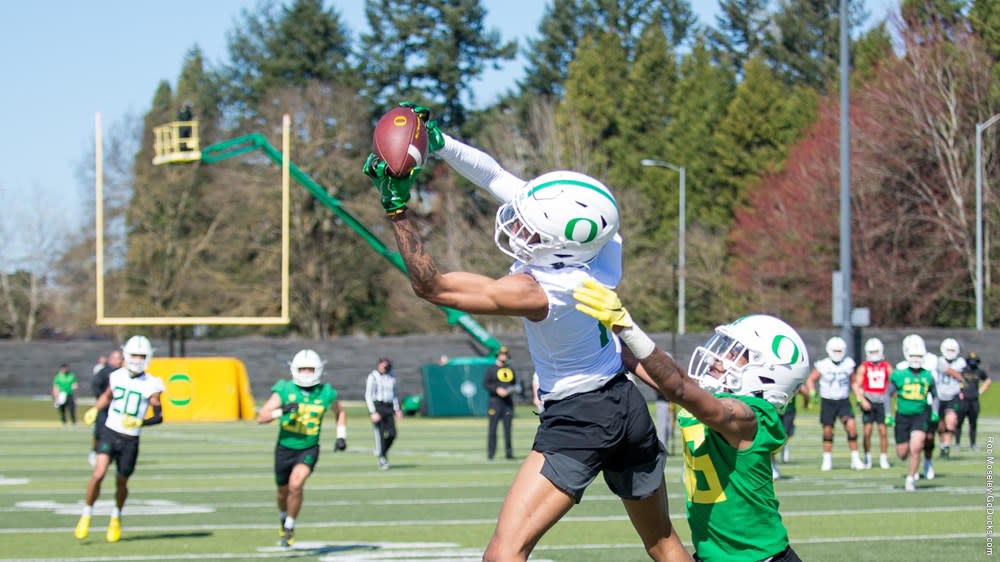 The Oregon Ducks signed its best wide receiver class in school history this past winter, headlined by Troy Franklin and Dont’e Thornton, who both enrolled early to participate in spring football.

Now with four practices under their belts, they have both impressed.

“They’re both doing a great job,” said Johnny Johnson III during Thursday’s media session. “I think they’re taking in the coaching and going with us on this ride.

“It’s been great. They’re hungry. They’ve been going at it, getting after it every day.”

In the final composite recruiting rankings, Franklin and Thornton ranked as the nation’s third and seventh-best wide receivers.

Now, they’re lining up alongside back-to-back Pac-12 Champions and showing they belong.

“Troy’s popped out a lot. His hands are second to none,” explained Johnson III.

During the Ducks first spring practice, Franklin caught a deep ball from 5-star freshman Ty Thompson, pictured below. That’s a connection Oregon fans have been anticipating for nearly a year now.

Franklin hasn’t been the only freshman to impress, though.

“Dont’e’s doing a great job,” contuied Johnson. “He continues to get better. He’s making plays for us and I think he’s going to be a great player here.”

Both players are playing outisde with Franklin at X and Thornton at Z, however offensive coordinator Joe Moorhead said “in certain formations, they’ll get work at the other spots.”

With all the talent returning, Moorhead stated “we’re certainly excited about both of the returnees and the incoming guys as well.”

The Ducks offensive coordinator thinks spring football will be invaluable for the development of the team’s younger players: “Those early enrollees, it’s critical for their development. Getting those spring practices, getting that conditioning and then having the summer and fall camp.”

In fact, it seems like there are real position battles for playing time at each wide receiver postion despite every starter returning for the 2021 season.

“They’re continuing to push each other,” said Moorhead. The older guys are helping the younger guys and that speaks to the culture of the program to have competition but still working to be good teammates.”

“It’s fun,” he said. “I love it honestly because there’s a lot you can learn from other people in the room. It’s just good to have good dudes in the room and more athletes you need to compete with to ensure you got to earn your job.”

Johnson III added he will need to earn a spot “at the next level” so he embraces this competition in his last season at Oregon.

In fact, the “super senior” thinks this is one of the most talented wide receiver groups Oregon has ever had.

“I think we can be one of those groups that go down in history.”

If Franklin and Thornton are as good as advertised, it’s certainly possible.

By Gzero NewsWire
20 hours ago

Washington’s Charlie Ostrem on leading the Pac-12 in assists: ‘All credit goes to the guys scoring the goals’

CBS full seven-round mock draft: Who do the Jags add?